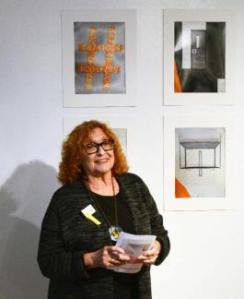 Sandra Levinson, Executive Director of the Center for Cuban Studies

In reality, the Geller Foundation is actually led by members of the New York City entity – the Center for Cuban Studies. Sandra Levinson, the Center’s Executive Director, presented the prize to released spies Rene and Fernando Gonzalez and the relatives of the still-incarcerated members of the Cuban Five. The ceremony was held last week at the headquarters of the Cuban Institute of Friendship With The Peoples (ICAP).

Former Directorate of Intelligence Officer Juan Reyes Alonso said ICAP is not a DI entity per se, but that it is overwhelmingly influenced by the intelligence service. Reyes Alonso claimed ICAP is penetrated by a small cadre of bona fide DI officers who are aided by a large staff of agents (i.e., collaborators). As a result, roughly 90% of ICAP is thought to be DI-affiliated. Similarly, the New York Times has reported on ICAP’s intelligence ties as far back as 1983.

The America Department was the name used by the intelligence wing of the Central Committee of the Cuban Communist Party from 1974 to the late 1980s or early 1990s. The DA was heavily involved in supporting revolutionaries and terrorists, but has since become more focused on political intelligence operations. This service is now called the America Area of the International Department of the Cuban Communist Party (PCC/ID/AA).