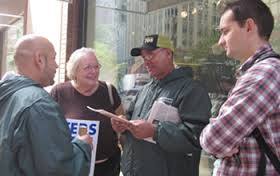 The leftist newspaper, The Militant, reported on “Free The 5” efforts at a Nebraska Peace Conference in early October. The event reportedly drew over 100 attendees to discuss issues from the war in the Middle East to the environment. When the attendees broke for lunch, Nebraskans For Peace (NFP) President Mark Vasina invited everyone to see an art display by jailed Cuban spy Antonio Guerrero. He also introduced Jacquie Henderson, who helped organize the showing, to share a pro-Castro perspective on the spy-terrorists.

Apparently oblivious to the apartheid practices of the Castro dictatorship, Henderson lauded three of the jailed spies for having served in Angola against a “white supremacist South African regime.” In the end, dozens of people reportedly looked at the paintings. The newspaper also reported that 11 attendees “picked up” books authored by Guerrero or Castro apologists, suggesting that they may have been given away free.