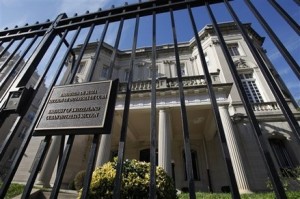 Miami’s three Cuban-American Republicans in the U.S. House of Representatives say they don’t want to see a Cuban embassy opened in Washington D.C. — or a Cuban consulate anywhere else in the country — because it would risk allowing Cuba to spy on the U.S.

There is already a Cuban interests section in D.C., and a Cuban mission to the United Nations.

“We are all too familiar with the Castro regime’s efforts to utilize their diplomats as intelligence agents tasked with the goal of committing espionage against their host countries,” the members of Congress and several colleagues wrote in a letter Thursday to the U.S. State Department. “We believe that allowing Cuba to open an embassy in Washington, D.C. or consulates will further open the door for their espionage activities.”

They also asked to be briefed in detail about the status of the negotiations between the U.S. and Cuba to normalize diplomatic relations.

Signing the letter were Miami Reps. Ileana Ros-Lehtinen, Mario Diaz-Balart and Carlos Curbelo, as well as Rep. Albio Sires, a New Jersey Democrat and fellow Cuban American, and Sen. Ted Cruz, a Texas Republican whose father was born in Cuba. Cruz is considering a 2016 presidential candidacy.