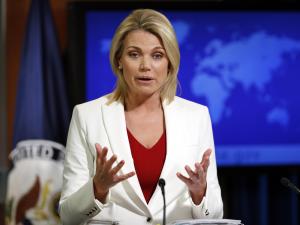 The U.S. has expelled two Cuban diplomats in retaliation for a bizarre incident purportedly involving a covert sonic device that allegedly left a group of American diplomats in Havana with severe hearing loss.

State Department spokesperson Heather Nauert on Wednesday spoke only cryptically about the matter, referring to an “incident” without elaboration.

Cuba has strongly denied any allegations of wrongdoing.

The purported affair began in late 2016 when a series of U.S. diplomats in Havana began suffering unexplained losses of hearing, according to officials with knowledge of the investigation into the case, the Associated Press reported.

Several of the diplomats had recently arrived at the embassy, which reopened in 2015 as part of former President Obama’s re-establishment of diplomatic relations with Cuba and relaxation of travel restrictions.

Nauert said that as a result of the incident, two Cuban diplomats were ordered to leave their embassy in Washington on May 23.

“We requested their departure as a reciprocal measure since some U.S. personnel’s assignments in Havana had to be curtailed due to these incidents,” she said. “Under the Vienna Convention, Cuba has an obligation to take measures to protect diplomats.”

She did not say how many U.S. diplomats were affected or confirm they suffered hearing loss, saying only that they had “a variety of physical symptoms.” She said none were life-threatening.
In a lengthy statement late Wednesday, the Cuban foreign ministry said: “Cuba has never permitted, nor will permit, that Cuban territory be used for any action against accredited diplomatic officials or their families, with no exception.”

The statement said the government had been informed of the incidents Feb. 17 and launched an “exhaustive, high-priority, urgent investigation at the behest of the highest level of the Cuban government.”

It said the decision to expel two Cuban diplomats was “unjustified and baseless.”
The ministry said it created an expert committee to analyze the incidents and reinforced security around the U.S. embassy and U.S. diplomatic residences.

“Cuba is universally considered a safe destination for visitors and foreign diplomats, including U.S. citizens,” the statement said.

The affair is playing out against a backdrop of a change in U.S.-Cuban relations following the inauguration of President Trump, who has tightened travel restrictions to the island nation.

U.S. officials told the Associated Press that about five diplomats, several with spouses, had been affected and that no children were involved. The FBI and Diplomatic Security Service are investigating.