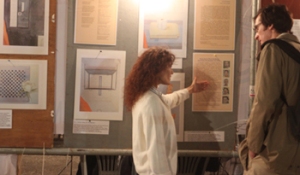 By George Mehrabian, The Militant

ATHENS, Greece — About 300 people viewed watercolors by Antonio Guerrero, one of the Cuban Five, at the Oct. 2-5 annual Syriza youth festival, a major political and cultural event here attended by several thousand people. Syriza (Coalition of the Radical Left), a social-democratic coalition founded in 2004, is today the largest opposition bloc in the Greek parliament. On display was a collection of 15 watercolors by Guerrero titled “I Will Die the Way I’ve Lived” that depict the experiences of the five revolutionaries during their first 17 months in the “hole” at the Federal Detention Center in Miami. The exhibit was part of a Cuban booth set up in the festival’s International Corner, which was dedicated to Palestine, Venezuela and Cuba. Showings of Guerrero’s art in Greece have been organized by a joint effort of the José Martí Cultural Association, Greek Solidarity Network-La Red Solid@ria, Hasta La Victoria Siempre and the publishing house Diethnes Vima. “The Syriza youth festival was the 10th stop since the Greece tour was launched in May,” said Loukia Konstantinou, who helped organize the showing. More than 1,300 people have seen the exhibit, some 550 of whom have signed petitions demanding President Barack Obama release the three revolutionaries who remain in prison — Gerardo Hernández, Ramón Labañino and Guerrero. Participants at Guerrero’s 15-watercolor exhibit in Greece have bought a total of 159 books published by Diethnes Vima and Pathfinder Press on the Cuban Five, the Cuban Revolution and other working-class politics.

According to Prensa Latina, Castro supporters in Greece and Haiti are reportedly working on behalf of the Cuban Five. PRELA reports that the Greek-Cuban Association of Friendship and Solidarity presented to US Embassy officials a resolution demanding their immediate release. According to the organization´s leader, Nikos Karandreas, “the document…will be delivered to the US Embassy in Athens on Feb.13,” states PRELA. The letter also denounces the audacity of the United States for incarcerating foreign spies. The solidarity group – according to PRELA – also demands the US immediately end its embargo against Cuba and urges the end of the European Union´s “common position” on Cuba.

The Cuban News Agency (ACN), meanwhile is reporting that the Association of Haitian Professionals Graduated in Cuba has renewed its support for the release of the Cuban Five. Association executive secretary Frank Dupuche reiterated their commitment during a meeting with Cuban diplomat Junier Calderon and Yoandra Rodriguez, an official with the Cuban Institute for Friendship with the Peoples (ICAP). Meanwhile, members of the Friends of Cuba Club in the southeastern region of Jacmel also demanded the release of the five convicted spies.